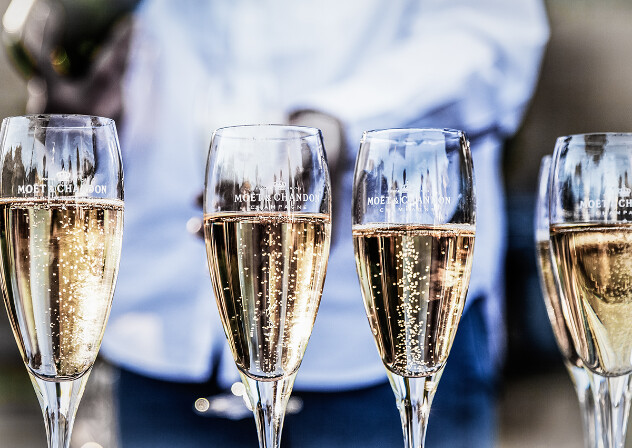 Sparklers are for celebrations. They’re for weddings, showers, anniversaries, birthdays, or just the fact that you’re not at the office. While not very many people bring Champagne tofunerals, sparkling wine can be enjoyed just as any other wine. It is, after all, wine…just with some added pizazz.

So, what actually makes a wine a sparkling one? Duh…bubbles! I know, dumb question, but what are the bubbles, how did they get there, and why does it matter?

For all wines, winemaking is integral to not only the places the wines come from, but also to what shows up in the glass. There are many types of sparkling wine, and to understand the bubbly, the popped-bottles, the in da club soda, the celebration libation, the grape juice with jazz hands, the suds of Sunday fun-day (yeah that’s enough), we need to talk about fermentation. As wine lovers, we’re not dealing with Welch’s, so bring on the fermentation.

Very simply, grape juice requires just two things to turn into wine: sugar and yeast. Yeast can either be added to the juice or it can come naturally as it is ambientin wineries. Either way, yeast feasts on the grape juice’s sugar, and it’s always hungry.

Yeast converts sugar into alcohol, heat, and, you guessed it, carbon dioxide! In still wines, the CO2 is released during fermentation, but in sparkling wines, it needs to be captured. There are two prominent methods of making sparkling wines, each makes different types of sparklings we’re familiar with and can indicate which fruit juice with fireworks is right for you.

In traditional method sparking wine production, first, still wine is produce with low alcohol and high levels of sugar. This wine is placed into a bottle and additional yeast and sugar are added to the wine inside the bottle. The bottle is then sealed with a cap (like a beer bottle), and a second fermentation occurs within the bottle itself.

Overtime, the yeast fully consumes the sugar resulting in additional alcohol; it dies; and the bottle is left with wine, CO2, and yeast corpses. It is now up to the winemaker (and sometimes a country’s law) as to how long to leave the carbonated wine aging on the dead yeast. The dead yeast is called lees, and lees gives a wine a more full body and often imparts notes of bread, biscuits, nutty flavors, and yes, yeast.

Once the aging is complete, the wine is disgorged, which is a bit like a winemaker’s version of poppin’ bottles. The neck of the bottle is made very cold, flipped upside-down, and the cap on the bottle is opened, allowing the lees to rush out of the bottle. With modern technology, this happens in a fraction of a second. Just before bottling, we have dosage. Think of this as a dose of sugar. This ranges from brut nature (no dosage), to extra brut (dry but a bit of added sugar), brut (dry but with slightly more added sugar, and all the way up to sweeter versions including extra-sec, sec, demi-sec, and then doux (sweet). The term ‘brut’ comes from Champagne, which was traditionally consumed more like dessert wine and was often very sweet. The brutes of Britain were not big fans and wanted to drink it with their meal, so brut Champagne was made and exported for them.

Traditional method sparkling wine is often considered to be of extremely high quality, as the winemaking process is delicate and difficult. There are a number of examples of fantastic traditionally made sparklers, but why not start with the obvious and most revered sparkler of them all: Champagne.

Champagne is unrivaled in quality ever since Dom Pierre Pérignon began using the traditional method in a region of France called Champagne. The region is the most northern wine growing onein France, and being so far north, variable temperatures, rainfall, wind, frost, and freezing can make consistent production a challenge even for the best producers. This is why we often see N.V. or non-vintage Champagne on most bottles. This ensures consistency, as winemakers are allowed to use the wine resulting from grapes from multiple calendar years.

While there are seven grapes permitted in Champagne, three are most popular: Chardonnay, Pinot Noir, and Pinot Meunier. Most Champagnes utilize all three grapes; however, blanc de blancs (white from whites) and blanc de noirs (white from blacks) are common as well. The Chardonnay, as the white grape, provides great acidity and notes of green apple and under-ripe pear, while the black (or red) grapes of Pinot Noir and Pinot Meunier provide more complex fruit aromas and additional structure. We recommend trying a variety of Champagnes to see both what fits your taste as well as what may fit your meal.

Like Champagne, Cava is made in the traditional method, but it is created with different grapes and in a different climate. Most Cava, though not legally required, is made just outside of Barcelona, Spain in an area called Penedés. This region is right along the Mediterranean, with many of its vineyardslying slightly inland and at higher elevation to preserve freshness, acidity, and aromatics. The three traditional Spanish grapes for Cava are Macabeo, Xarello, and Parellada; however, starting in 1981, the Spanish government chilled out a bit and allowed Chardonnay, Pinot noir, and Subirat (Malvasia) in Cava production.

In short, these are some of the best value wines on the planet. Like Champagne, the production is delicate and difficult, and the final product can be as delicious.  Cava may also come in Reserva and Gran Reserva with increasing lees bottle age requirements (15 months and 30 months respectively). Speaking of value, don’t let it be lost on you that this is nearly the same as Champagne lees agingbut for way less money.

Some fruit flavors of Cava are similar to Champagne; however, the fruit character is a bit riper, and in some cases, more tropical. This is due to the warmer climate, which causes the grapes to maintain higher sugar content, without the more under-ripe fruit (in a good way) and citric flavors of Champagne.

Italy, California, Oregon, Australia, and even England produce incredibly complex sparklers that borrow from the Champagne-born traditional method. The varieties are vast and their flavors are diverse, but all of them go through the all-important second fermentation in the bottle. These wines will almost always note the traditional methodon the label, as it indicates a distinct and respected style. For more information, go drink some of the wines below.

In many ways, this method of making your wine sparkle is similar to the traditional method. Sugar and yeast are still added, and the yeast still eats the sugar and makes the C02 in a second fermentation, but the key difference is that this occurs in large stainless steel tanks.  Why does this matter?

These steel tanks are large and contain more wine, so the secondary fermentation can produce more sparkling wine at a faster rate. This is a great advantage for more mass-produced wines, but by no means does this demand an inferior product. The winemaker actually has a number of options when it comes to the tank method.

In the traditional method, all wines undergo aging on the lees. In the tank method this does not need to be the case. Let’s say you’re making sparkling wine with very aromatic grapes such as Moscato, Glera (Prosecco), or Riesling. You may not want the bready character of the lees to interfere with the already aromatic character of the grapes themselves. In this case, the wine is pumped off of the lees and filtered under pressure, maintaining the aromatics as well as the carbonation.  This means of production is both cost effective and fast.  Additionally, if the winemaker wants a bit of body and bread character to the wine, the carbonated wine may stay with the lees in the tank for as long as he or she likes.  The actual bubbles that this method produces are more soapy or sudsyin texture than the uniform spherical bubbles of the traditional method.  This doesn’t mean the bubbles aren’t as good or less vibrant; it is a personal preference for how you like your mouth to sparkle. So, you can see how the tank method is extremely versatile, and it produces some of the most popular wines in the world. Speaking of popular…

Made primarily from the Glera grape (formerly called Prosecco before the Italian government decided it didn’t want ‘Prosecco’ made anywhere else), Prosecco is all the rage and your friend Karen’s excuse to drink before noon on a Sunday. It is a highly aromatic grape variety with fresh fruit notes and vibrant acidity.  While 85% of the blend must be made from Glera, a number of other varieties can make up the remaining 15%, including Chardonnay and Pinot Noir.

Most Prosecco is made in the Veneto region of Italy along with the neighboring Friuli-Venezia Giulia; however, the highest quality (according to the Italian government) lies around the towns of Conegliano, Valdobbiadede and Vittorio in the Veneto region. Asolo, in the Veneto, is also a highly regarded region for Prosecco. Some Prosecco is aged on the lees longer than others, and dosage (dose of sugar) may be added in the tank on a similar scale to that of Champagne. If you are looking for a fun, bright, and floral sparkler, then this tank method wine from Italy is perfect. Speaking of Italy…

These wines are pretty sweet. Literally. Both are produced in the Northwest of Italy in an area called Piedmont (foot of the mountains) and outside of the town of Asti. Both wines are made from the highly aromatic and vibrant Moscato grape, but they differ in CO2 content as well as sugar level.

Unlike Prosecco, these sweet sparklers do not go through a second fermentation in tank (though some producer of Asti Spumante decide to use the traditional method), so they are not technically Charmant method wines; however, these wines are only fermented in tanks. Their fermentations are halted via either lowering the temperature of the tank or filtering out the hungry yeast. This leaves unconsumed sugar and lower alcohol levels as well as lower CO2 pressure.  Asti Spumante has higher levels of alcohol and CO2, while Moscato d’Asti has higher levels of sugar. Moscato d’Asti is made in the frizzante style, which indicates a lower level of C02 than the spumante designation.  While sweet, these wines are extremely versatile in their pairings, going brilliantly with spicier foods and aromatic cheeses.

One additional aromatic, elegant, and refreshing sparkler comes in the form of German and Austrian Sekt. Sekt, literally meaning ‘sparkling wine,’ is made in the tank method 95% of the time. Riesling, Pinot Blanc, Pinot Gris, Pinot Noir, and Grüner Veltliner (Austria) make up these wines that are growing in popularity. As a quick sweetness level trick, check the alcohol percentage on the bottle. The higher the alcohol, the lower the sweetness (12.5-13% will be about equivalent to a brut Champagne or Cava). Along with the Italy’s famous Lambrusco, countries all over the world are developing exciting, fruity, and floral tank method sparkling wines, so go get tasting!